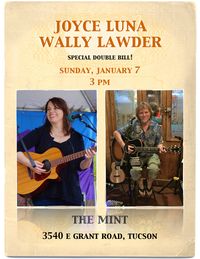 Wally & Joyce are excited to kick off 2018 with a rare show together at the Mint! We'll both be playing solo (altho you can of course expect surprise musical guests), & we'll be doing songs by ourselves & together.

The Mint's new owners are doing a lot to support live local music. They have made this venue more welcoming without getting rid of a lot of its charm and character. Show will be on the covered patio, weather permitting.

Come check us out! No cover charge.

From Joyce's website, www.joycelunamusic.com: Joyce feels at home on stage like nowhere else. Her time away from performing instilled in her what a privilege it is to stand on that stage and connect to an audience through words and music, laughter and emotion, rhythm and story. Her hope is to always bring positivity, truth, fun, and a sense of interconnectedness to each show!

“...Just about the closest thing to musical nirvana you’re going to encounter in this or any other life, unless you’ve been very, very, good indeed & have a major deity owing you a big favor.”—Paul Rapp, The Metroland

Wally is a prolific songwriter with 5 CDs of original music to his credit with another one on the way. He usually performs with a full band, so this more intimate show is a rarity for him and he looks forward to it!

Wally was the winner of the 2010 ACLU Southwest NM songwriting contest, a finalist in the 2009 Tucson Folk Festival Songwriting Contest and winner of the 2008 Gila River Songwriting Competition. Pulitzer Prize winning poet Stephen Dunn wrote: “Wally Lawder is both a romantic and a social critic, and his quiet lyricism heightened by his gifts as a guitarist gives me great pleasure.”